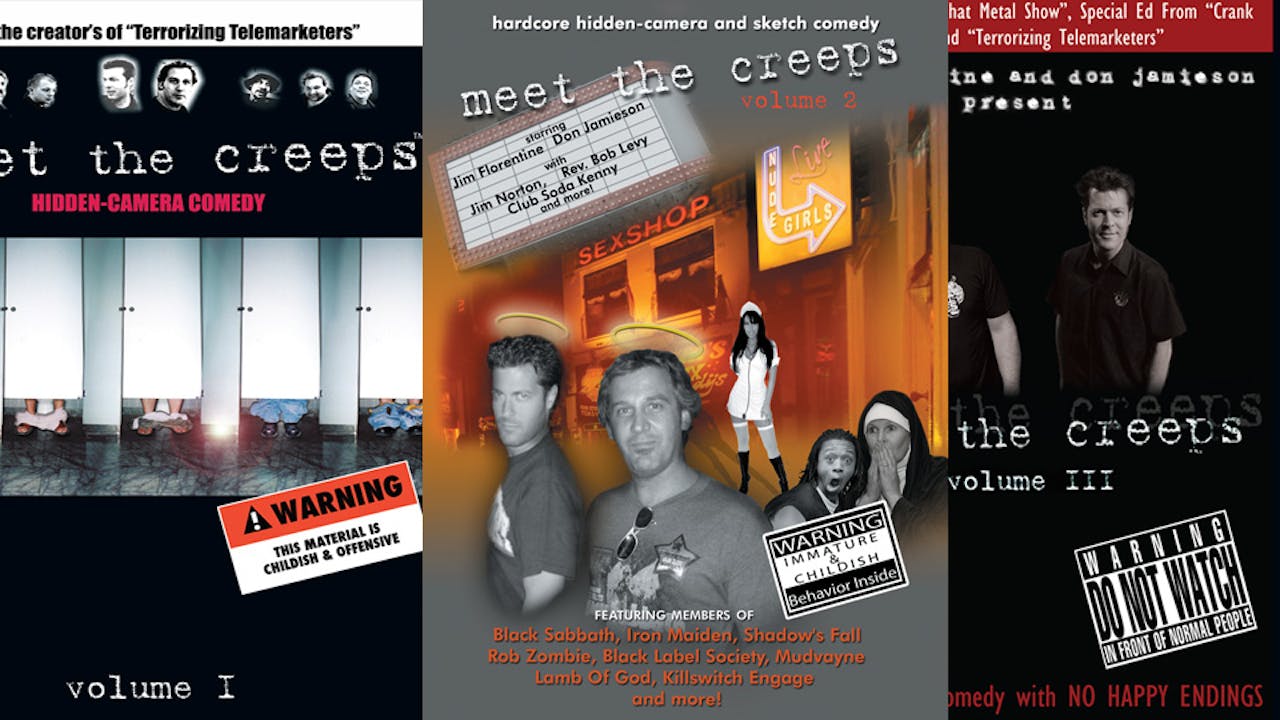 All three "Meet the Creeps" DVDs in one box set package.

Meet the Creeps Volume I

Get prepared to witness a hilarious hidden-camera comedy DVD that mercilessly puts unsuspecting people in the cross hairs of outrageous comics Jim Florentine (Comedy Central’s "Crank Yankers", "That Metal Show"), Don Jamieson ("That Metal Show"), Artie Lange ("The Artie Lange Show"), Jim Norton (Sirius/XM's "Opie & Anthony"), KC Armstrong ("The Howard Stern Show") and their band of hilarious predators. The "Creeps" are out to make people as uncomfortable as possible while capturing it all on camera. The viewers are in on the joke. Those who they are creeping out, are NOT. "Meet The Creeps" will keep you from looking at your world the same way again. Ever wonder what an "upper decker" is? You will never look at a men's room the same way again and you'll have a hard-time not thinking of the "Creeps" the next time you bring your girlfriend flowers. Plus, an animated Jim and Don torture a telemarketer and go fishing for fatties! Also Starring: Club Soda Kenny, Gary Gentile and Chuck Mignanelli, model Anna Lexington, plus more of the nation’s hottest comedians!

The second installment of hardcore hidden camera comedy from Emmy-Award Winners Jim Florentine and Don Jamieson ("That Metal Show"). Also back for more are Meet The Creeps favorites Jim Norton, Club Soda Kenny, Rev. Bob Levy, and a whole slew of new creeps! Once again, nobody is safe from the attack - rock bands, construction workers and even Pastors! And if you need a break from the merciless onslaught of the hidden-camera, check out some scripted comedy sketches that push the boundaries of what you see on both network and cable tv. This DVD is for people who don't like their humor safe. Heavy metal cameos by: Bill Ward, Rob Zombie, Bruce Dickinson, Zakk Wylde, Jason Bittner (Shadows Fall), Lamb of God, Killswitch Engage & more.

This is the 3rd volume of hidden-camera pranks from Emmy-Award winners and co-hostos fo VH1 Classic's "That Metal Show," Jim Florentine and Don Jamieson. This DVD is over an hour and a half of uncomfortable comedy. This time they terrorize tattoo parlors, real estate agents, comedy club audiences and more. Like the front cover says, there are no happy endings to these pranks. We never reveal to our victims that it was all a big joke. Each bit fades to black as the viewer wonders what the f*ck just happened! Also featuring: Club Soda Kenny, Laura Levites & Shuli Egar (The Howard Stern Show).